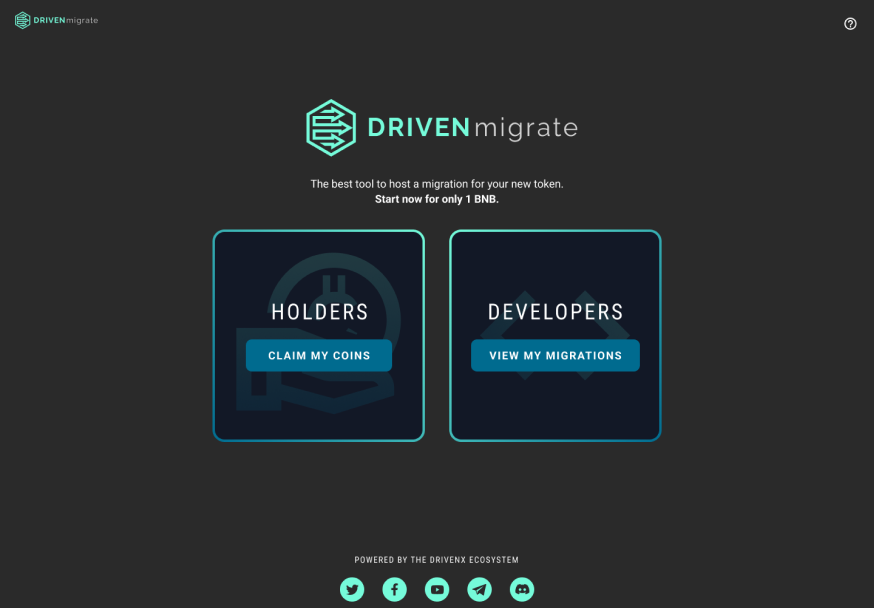 DRIVENteam recently completed a migration from the DRIVENx 1.0 contract to the 2.0 version, so we understand how difficult it is to make that transition.

This space is quite dynamic, which necessitates some contract modifications. Currently, the only answer for them is to migrate all of the holders' holdings from one contract to another, which takes a significant amount of effort and planning on the part of developers.

We are here to make that process as simple as possible for both holders and developers, with the implementation of the DRIVENmigrate platform in the crypto space.

DRIVENmigrate is a web application that can be used on both PC and mobile devices. DRIVENmigrate aims to assist developers, project owners, and their investors in migrating from an old token smart contract to a new smart contract in a few easy steps.

DRIVENmigrate was developed by the DRIVENecosystem development team, who used Solidity for the Smart Contract, React.js for the application's interface, and Web3 to combine the Smart Contract's functionality with the web interface.

DRIVENmigrate offers a number of features that will make transitioning from an old to a new smart contract easier:

With only a few clicks, developers will be able to set up a migration campaign. Holders will also find it simple to acquire the new tokens: they will need to enter their old token address and search for the migration, validate that our platform discovered the correct migration, and then receive the tokens.

When developers want to create a new migration, they will have to pay a fixed fee of 1 BNB to the Smart Contract. There will be no further charges.

Developers will have the option of migrating to a new smart contract with different decimals and total supply.

5. Dynamic [Available from the next update]:

You can use DRIVENmigrate on any major blockchain (Polygon, Fantom, Ethereum, Cronos) thanks to our cross-chain capabilities.

Stake your tokens on the DRIVENswap DeFi staking & farming platform to earn passive income, compound or harvest your rewards anytime!